Linux offers several mechanisms for reducing electrical energy consumption The most effective of these are CPU frequency scaling mechanisms implemented in the cpufreq module. The module constitutes an intermediate layer between hardware CPU drivers controlling voltage and frequency and software drivers responsible for implementing the designed control policies at the OS level.

Software drivers made available by the Linux kernel are free to use and support a wide range of hardware architecture. The theoretical research conducted by the NASK Research Division indicated that existing CPU control mechanisms can be improved. The new tools allow for server performance optimisation via adjusting CPU frequency and voltage to the services made available by the operating system. This results in reduced energy consumption costs and improved server performance.
A software package was developed as part of the project which:

The control mechanisms designed and implemented using the new software were then subject of experimental research. The tests were conducted on an experimental computational cluster at the NASK Virtual Internet Technologies Laboratory. The research goal was to estimate the increase in CPU control effectiveness compared to the following cpufreq module drivers: ondemand (basic CPU governor), powersave and performance.

The driver optimises the performance of the commercial version of the NGINX+​ HTTP server. Sample experiment results are presented in Figure 1. 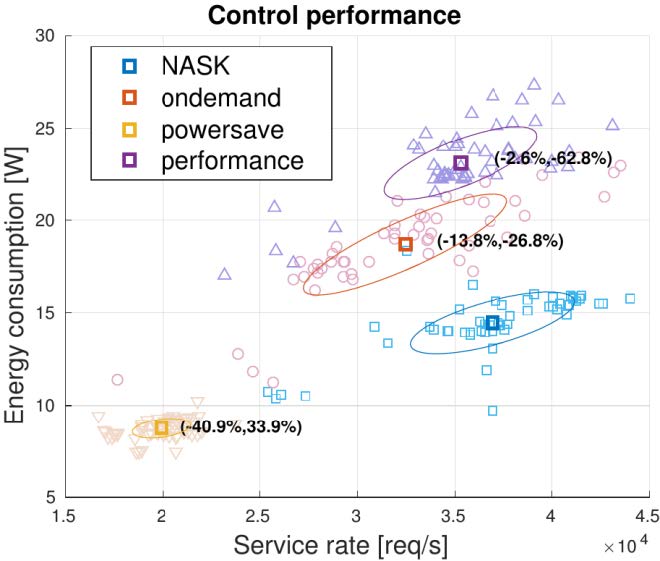 The NASK driver proved to be significantly more effective than the standard solution available in the Linux kernel.

All projects
Do you like cookies? By clicking the link “I agree” and proceeding to the site, you consent to our processing of your personal data and I agree to basic cookies, which are required for the site to operate properly. More